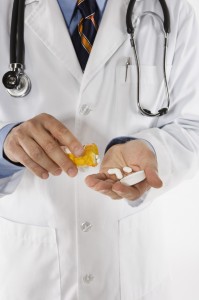 Amgen, a California-based biotechnology company, has reached a settlement with the United States Department of Justice (DOJ), as a result of which the company will pay $24.9 million to resolve claims of Medicare and Medicaid fraud brought under the False Claims Act. The United States alleges that Amgen paid unlawful kickbacks to long-term care facility pharmacy providers in exchange for steering Medicare and Medicaid patients to use of the drug Aranesp, Amgen’s anti-anemia drug. The pharmacy providers are alleged to be Omnicare Inc., PharMerica Corp., and Kindred Healthcare Inc. Kickbacks were paid in proportion to the volume of the drug purchased by each pharmacy, according to the government’s complaint. Providers that participate in federal health insurance programs are prohibited under the federal Anti-Kickback Statute (“AKS”) from offering or soliciting remuneration in exchange for referrals resulting in the purchase of a product or service eligible for reimbursement by the federal program. While not all such payments are illegal, payments which vary depending upon the volume of referrals are usually condemned by the statute. Providers that seek reimbursement under Medicare or Medicaid despite non-compliance with federal statutes such as the AKS may be liable for submitting, or causing to be submitted, false claims for payment in violation of the False Claims Act.

The Amgen kickbacks were allegedly paid in the form of grants, honoraria, speakers’ fees, and travel expenses to employees at the pharmacy providers. In return, according to the government, the pharmacies implemented a “therapeutic interchange” program whereby nursing home patients were taken off of a competing firm’s anti-anemia medication and switched to Aranesp. Consequently, the Medicare and Medicaid programs paid for countless Aranesp prescriptions for which reimbursement was not permitted because the referrals resulted from unlawful kickbacks. Additionally, the United States claimed that Amgen pressured some pharmacists to recommend use of Aranesp for patients for whom the drug was not medically necessary. Under the terms and conditions of participation, Medicare and Medicaid do not reimburse for medically unnecessary medical care, and such promotion by the drug’s manufacturer may also have violated the Federal Food, Drug, and Cosmetic Act (“FDCA”), which prohibits pharmaceutical manufacturers from promoting drugs for uses unapproved by the FDA or for medically unnecessary uses.

Initially, the allegations against Amgen were made in a private whistleblower suit filed under the qui tam provisions of the False Claims Act. Under the qui tam provisions, individuals with knowledge of fraud against the government may sue on behalf of the United States. Qui tam suits are filed under seal, and subsequently the whistleblowers (referred to as “relators”) disclose the allegations in the complaint to the DOJ. After an initial period of investigation, the DOJ determines whether or not the United States will exercise its right to intervene in the litigation. Regardless of whether the government intervenes, relators may proceed privately with their claims and receive an award equal to a percentage of the government’s total recovery. A relator who prevails without government intervention stands to recover between 25-30% of any final judgment or settlement in favor of the United States. In the Amgen case, the DOJ elected to intervene in a qui tam suit filed in 2011 by a former Amgen employee.

False Claims Act cases provide the government with a powerful tool for fighting fraud and abuse in federal health care programs by providing for civil penalties of as much as $11,000 per violation in addition to trebling of damages. In the year 2012 alone, the United States saw a record $5 billion in False Claims Act recoveries.